I don’t need a wake-up alarm at the farm.
At 5:59 am every morning Larry peels up our gravel driveway in his rusty and not-so-trusty Ford, and begins hammering, sawing, nail-gunning, and scraping our porch.
All this carpentry commotion is merely the backdrop to Larry’s music hullabaloo, which also commences at exactly 6am. Country music, rock, 80’s dance-pop, heavy-metal (the genre matters not) is all played at a unnervingly loud level. And above all that din, Larry sings. Every. Precious. Word. Whether he knows the song or not.
We all appreciate Larry. He is quirky, kind, and works without ceasing. A master carpenter who could not keep a steady job due to the bottle, Larry is now in a program for recovering alcoholics and has been sober for two years. No matter the weather, he is usually shirtless by mid-morning and has a huge tattoo on his left chest that reads “God saved me.”

Larry can fix anything and knows a little something about almost everything. Who knew that bleach helps poison ivy? Mothballs keep snakes away? The praying mantis eats horseflies? Larry does! The kids regale their dad every night with all their Larry-learnings.

One day Larry worked through lunch to surprise Colvin with a rope swing so she could swing above the “ivy”. Or, as most of us less generous curmudgeons refer to it, poison oak.

Last night, my lion-hearted girl was having a good boo-hoo over missing her best friend, Kate. She released the floodgates with shuddering sobs that had dammed up in that little, brave body over the last few weeks, and we talked about friends. “Larry is my only friend in Maryland.” she sniffed. 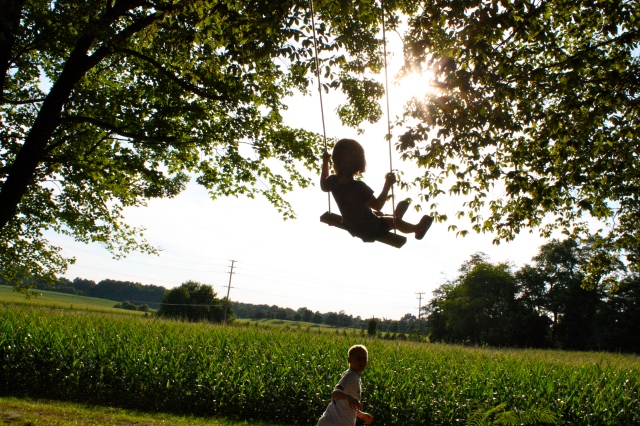 *This is a re-post from a few years ago when we were in the throes of fixing up a 1927 farmhouse that fought us every step of the way. Today, David and I are in the awful middle parts of renovating an 1985 ranch that would rather just stay in the blue-shag eighties, thank you very much. What I wouldn’t give to see and hear Larry’s truck rumble down my street at 5:59am tomorrow morning — even with a Britney Spears Pandora station as the morning’s soundtrack!

He is a good soul, a good man, and a good friend.

God bless you and keep you, Larry, and give you His peace.
Kim

2 responses to Swinging Above The Ivy